From the plainest and simple shoes cut from a single piece of smooth leather to intricately detailed shoes featuring fancy stitching, perforations, and edging, a man’s got a lot of options when it comes to dressing shoes. The variety can really be a bit overwhelming, especially when it comes to knowing which is which and what shoes to wear with what get-ups.

So let’s break it down as simply as possible.

Below is a hierarchy of the common dress shoe styles, ranked from most dressy to least, what defines them as such, and a few outfit options with which they look best and pair most appropriately. 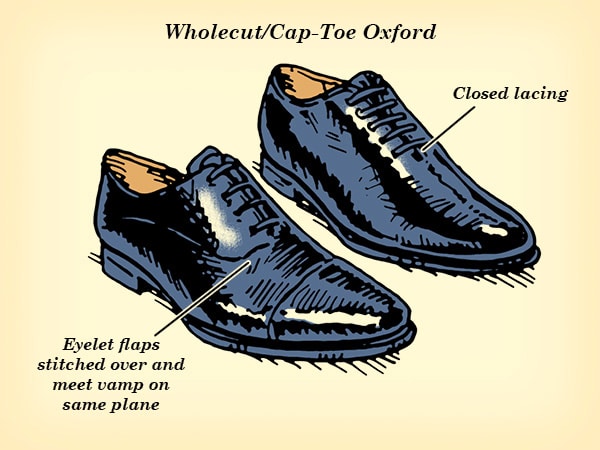 Characteristics: Oxfords that are either completely void of extra stitching, perforations, and other design elements, or darn near close. And what’s an oxford? Well first, contrary to popular belief, not all dress shoes are oxfords. On an oxford, the eyelet flaps do not sit unrestrained on top of the shoe. Instead, they’re stitched over where they meet the vamp (the leather that runs from the toe to the lacing flaps) and meet up with the vamp on the same plane.

A wholecut is a shoe with an upper that is cut and fashioned from one single piece of leather. Think of wholecuts as being sheets, and other pieced-together shoes as quilts.

Meanwhile, a simple cap oxford is a shoe with closed lacing, that has a line or two of stitching that accentuates the front of the shoe, giving the toe a bit of a capped look. Bottom line: These are the most simple, sleek dress shoes. Less is more. More… dressy.

What to wear it with: Tuxedos/evening wear; suits; blazer/sports coat with wool trousers; pressed, well-fitting cotton dress pants with a dress shirt and tie and/or sports coat/blazer. 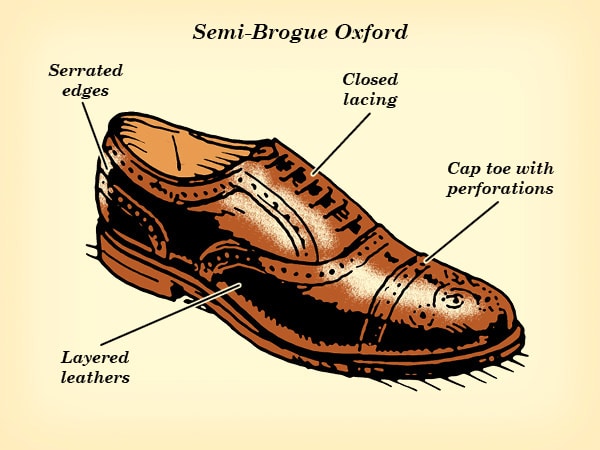 Characteristics: Originally used by those walking through marshy fields, these are the shoes with lots of holes and decorations (the holes used to help the muck and water drain out). Now they’re considered one of the dressiest shoes out there. Funny how times change.

Semi-brogue oxfords sport a cap-toe with perforations, pinked/serrated edges, layered leathers, and usually a medallion of perforations adorning the toe. They also come with closed lacing and are thus still plenty sleek. Yet all that busyness with the design makes them less sober and more flashy.

What to wear it with: Suits; wool trousers with a blazer/sports coat; possibly dark wash jeans, depending on the color of the shoe (say, a walnut version of the Allen Edmonds Strand). 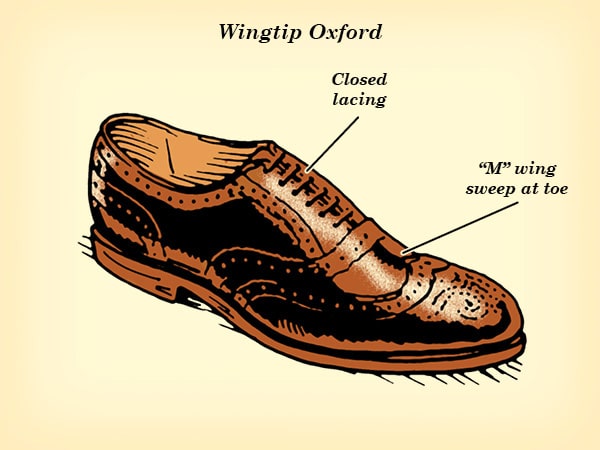 Characteristics: Like the semi-brogue oxford, only with the classic, unmistakable “M” wing sweep at the toe (as seen from above by the wearer), which drops down and terminates about halfway back to the heel. Oxford-style lacing makes them much easier to dress up than their open-laced cousins.

What to wear it with Suits, although some would argue against that (take a look at the Allen Edmonds McCallister though, and try and tell me those wouldn’t look great with a suit); wool trousers; pressed cotton pants; dark wash denim and sports coat. 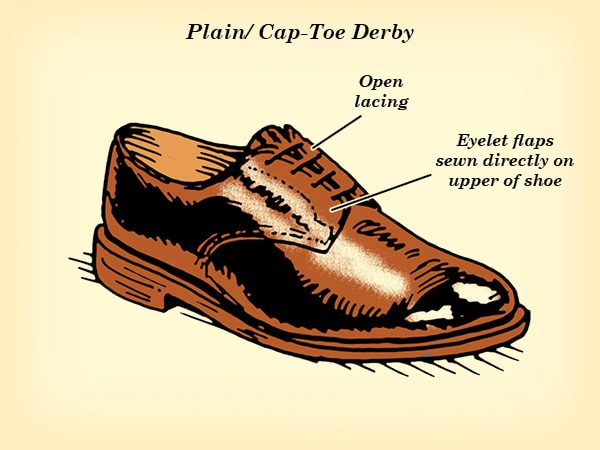 Characteristics: Now we’re getting away from oxfords, and into their open-laced brothers: derbies. Whenever you picture a dress shoe, chances are you picture a relatively simple derby. Derby shoes, unlike oxfords, have the eyelet/lacing flaps sewn directly to the upper of the shoe and are unrestrained by any sort of line of stitching across the tops of them. This is called open lacing, and this interruption in the silhouette makes them a little less sleek, and therefore, less dressy.

What to wear it with: Suits (yes really), especially those made of more casual fabrics like tweed, linen, or cotton; wool trousers; cotton trousers; jeans 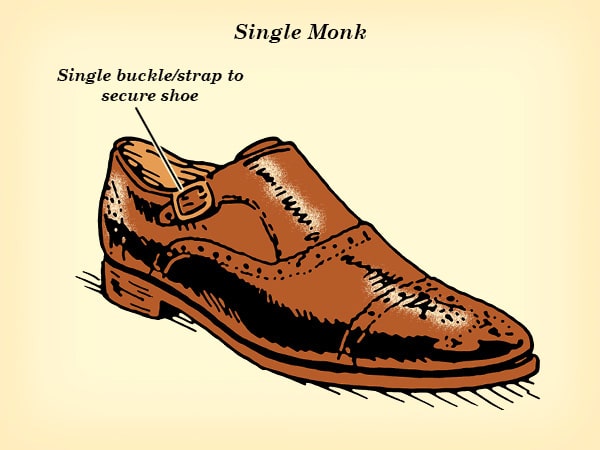 Characteristics: Instead of laces providing that cinch-down tension, this type of shoe is secured to the foot of the wearer by a single buckle and strap system. A little more fashion-forward for sure, but what seemed like a trend certainly now appears to have cemented itself into accepted menswear for years to come. And yes, many purists would have these shoes a bit lower on this hierarchy, but monk straps can be super sleek. Especially the single monk variety, with the buckle and strap being positioned higher up the shoe, closer to the ankle.

What to wear it with: For some…suits, especially when wearing a suit without a tie; wool trousers; well-pressed cotton trousers; rumply chinos, sometimes, depending on the color/texture of the shoe uppers (say, if they’re suede); dark wash jeans. 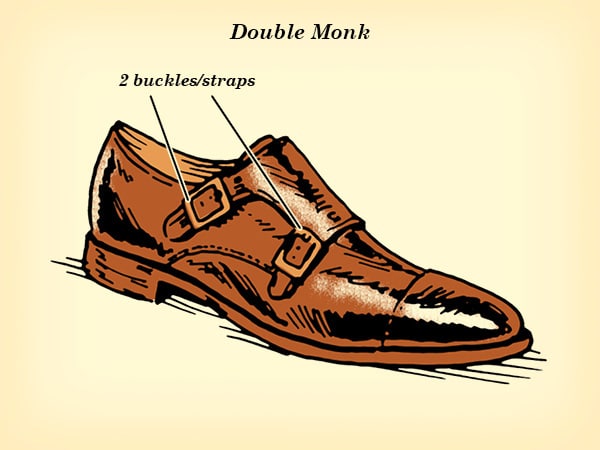 Characteristics: Like a single monk, with an extra buckle closer to the toe. Yes, these are basically a fashion-forward, dress shoe version of velcro sneakers. And some of us absolutely still love them.

What to wear it with: Suits, for some, but that extra bit of flash is pushing it in some more conservative/sober environments; wool trousers; pressed cotton dress pants; dark denim. 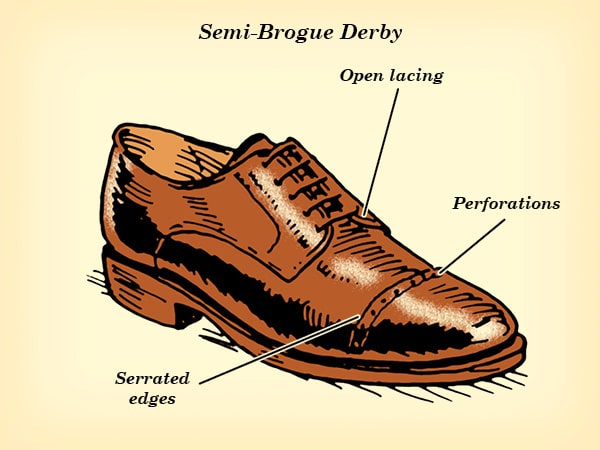 Characteristics: Like a semi-brogue oxford, only with the derby specific “open” style of lacing/eyelet flaps. Along with those flaps, all the extra perforations and serrated edges make for a pretty busy shoe. There’s actually not many of these around.

What to wear it with: Wool trousers; cotton trousers; jeans; wearing them with a suit is a little iffy since there’s a lot of visual attention that ends up at your feet. 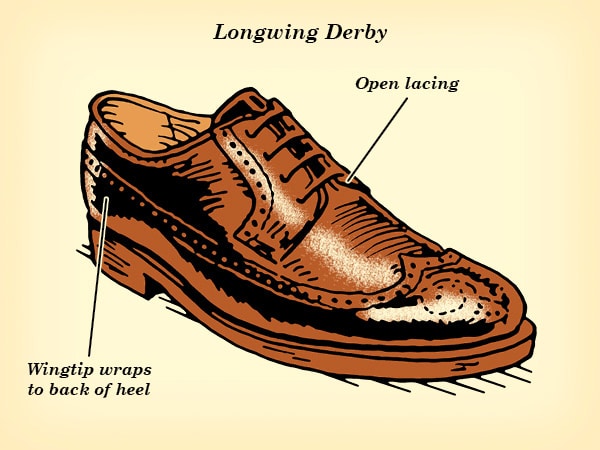 Characteristics: An open-laced shoe with a wingtip that doesn’t terminate midway down the side of the shoe, but instead wraps all the way to the back of the heel. They’re highly versatile, and that longer wing has an almost sporty, racing-stripe feel to it.

What to wear it with Smart, casual wear of all kinds, especially if the shoes are suede; these also look great with summer fabric suits like seersucker or linen, if you happen to have them. 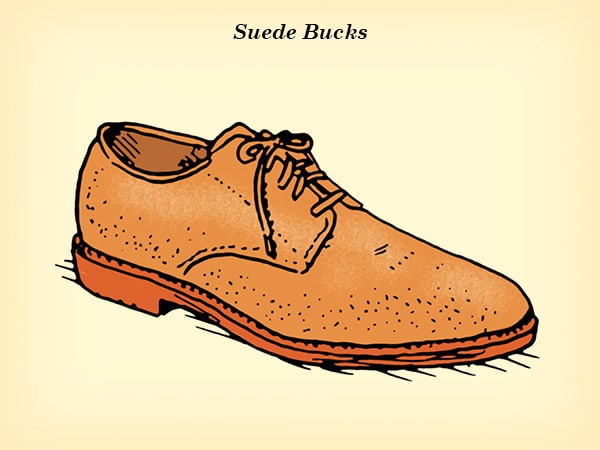 Characteristics: A plain toe derby-style shoe void of extra decoration/stitching/perforations that are made from suede or nubuck (hence “bucks”).

What to wear it with: Summer suits and summery pants; if the color of suede is darker (and not the traditional white or off-white), then these can absolutely pull extra duty with cords, chinos, and jeans when it cools down; grey suede, believe it or not, is hugely versatile here, since you don’t have to worry about matching a belt color to it.

One thought on “Types of Men’s Dress Shoes”